Figurative representation in “The World Unseen”: An analysis of Symbol, Motif, Paradox and Allegory

*This is continuation of "Figurative representation in “The World Unseen”: An analysis of Charactonym, Metonymy and Imagery".

**Click on images to open. All images are copyright protected. 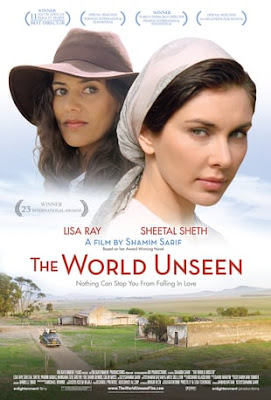 The World Unseen is a 2008 historical drama film written and directed by Shamim Sarif, adapted from her own novel of the same title. The film is set in 1950s Cape Town, South Africa during the beginning of apartheid.

The World Unseen is critically acclaimed and has received warm reception, winning numerous awards in various film festivals around the globe. It was released in 2008/2009.

The film The World Unseen is chosen for this study because of its richness in figurative representation. The study is removed from the novel, which the film is based on.

At its core, one of the themes of the film is love. It makes a number of statements about love: love blossoming in very difficult circumstance, love transcending racial barrier, forbidden love, familial love, parental love and the struggles of love.
.
FIGURATIVE REPRESENTATION IN THE WORLD UNSEEN

A symbol is an object, person, situation, word, idea or action which has a literal meaning in the story and at the same time, represents something other than itself.

A motif is when a word, phrase, image or idea is repeated throughout a work. It could be used to establish mood, to support the theme, foreshadowing or for other purposes.

A paradox is a contradiction that is somehow true. It can take a form of oxymoron, overstatement or understatement. It can also blend into irony.

Allegory is something that has a second meaning, usually by endowing characters, objects or events with symbolic significance.

Figurative representation is a very good way to give auxiliary meaning, idea or feeling in a motion picture. I personally think that the film The World Unseen has achieved that tremendously well.

Buy the DVD "The World Unseen":

Buy the NOVEL "The World Unseen":

Buy the AUDIOBOOK "The World Unseen":

All articles are by Mafuzah Aris, unless otherwise indicated. Please quote/cite accordingly. Also read and understand Terms of use before using this blog.

Discussion and comments are always welcome. Contact me here.